Then we have the articles about how Gillette miscalculated and alienated people they were trying to get to like them. One of Forbes’s many articles about the ad attempts to explain “Why Gillette’s New Ad Campaign Is Toxic.”

Finally, we have the people who are appalled. “This ad is explicitly against toxic masculinity? Masculinity is under attack!” scream people who don’t understand how adjectives work. 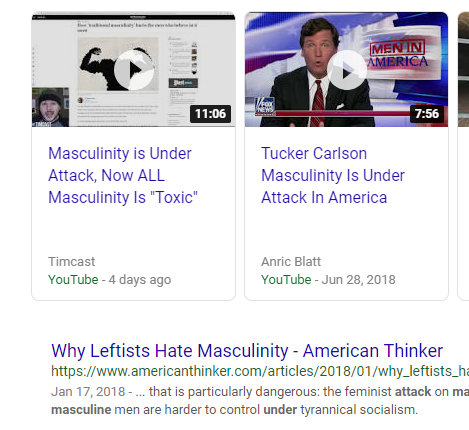 While I did see one article that points out that Gillette wants people to debate their ad (“That Controversial Gillette Ad Did Exactly What It Was Supposed to Do,” by Dani Di Placido via Forbes), most people categorize the Gillette and Nike ads as of the same fabric as the Always “Like a Girl” campaign, albeit with a little more willingness to push a discussion forward. (See “Razor Burn: Gillette Add Stirs Online Uproar,” in the New York Times)

However, in my book, Gillette copied Nike by using a newer strategy: outrage marketing.

First let’s back up for a second and explain some standard marketing techniques. One of the key factors in brand loyalty (and thus sales) is trust, and corporate responsibility campaigns encourage consumers to see a company as a social good. Companies sponsor service projects, donate some of their profit to charity, fund scholarships, or allow their employees to participate in service projects and fundraisers on the clock.

And of course some companies create ads focused around a social good they’ve adopted as their cause. For example, Dove’s thing is helping women feel beautiful. Women are their target market, so establishing themselves as a brand that doesn’t want to body-shame women benefits the brand. 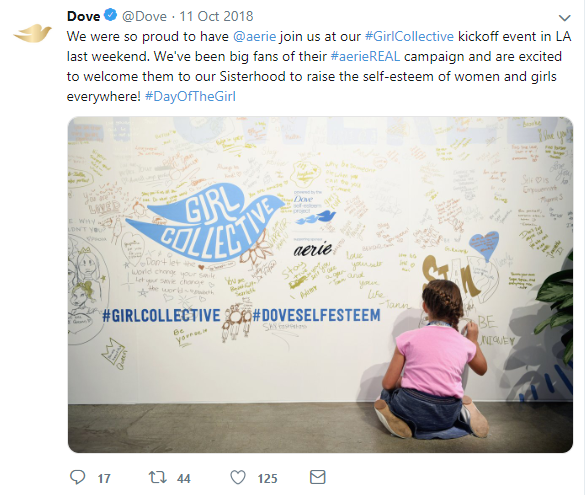 More relevant to our topic today, such campaigns are common. Feel-good cause campaigns are still important, but they’re not enough to set a company apart anymore.

Another common tactic is for a company to sponsor or give free products to bloggers, vloggers, Instagrammers, and the like who already have an audience that trusts them. When these “influencers” recommend a product or announce that they’re sponsored by Dollar Shave Club or whatever, viewers and readers are more likely to pay attention. 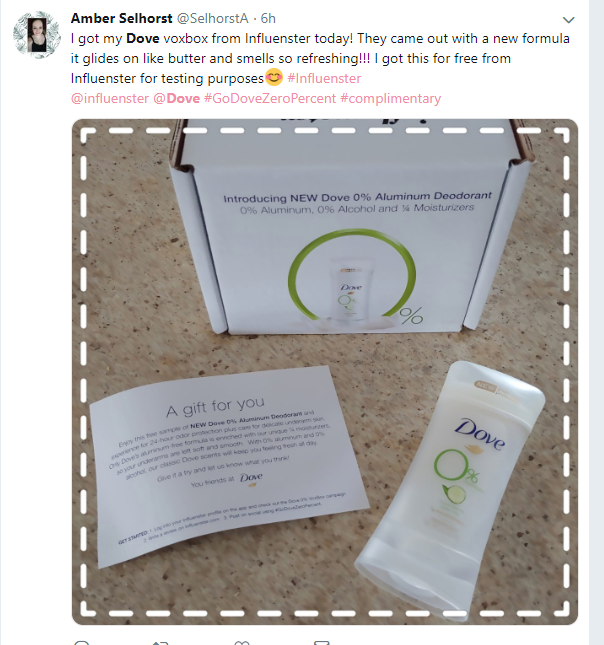 But this tactic is standard too.

Your client is Nike, an international corporation that already has brand recognition and premier market share. Your job is to conduct a campaign that inspires long-term brand loyalty in Nike’s target demographic, which is young men from 18 to 29 years old. You also want to reach women and young athletes.

So you ask yourself what you know about that audience. You know you’re dealing with millennials and Gen Z, groups that distrust ads and marketing and that like companies to take a stand. You know your audience is engaged online, are racially diverse, and trust the product ratings of friends and influencers more than corporations. They prize sincerity and want to improve the world (Source 1 and Source 2).

So you need a new strategy. In your brainstorming meetings, you try to solve the problem.

Question: What kind of content goes viral on social media and provokes passionate discussion that gets on the news?

Next question: What induces people to cement group loyalties and follow them blindly and with irrational passion?

Your new goal: Harness the energy of political fights on social media to increase brand loyalty for Nike.

So now you know that you want the target audience to see Nike as an ally in something political and important to them. To make this loyalty deeper than any other corporate responsibility campaign, this cause needs to be controversial outside the target demographic but not so much within it.

A perfect fit. Nike’s brand even involves supporting athletes even when sports organizations like the NFL don’t. But are protests like Kaepernick’s too controversial? Let’s look at the numbers.

Nike would have had focus groups, but I don’t have that data. So here are some polls. In early 2018, about 53% of Americans said that kneeling in protest during the national anthem is never appropriate. However, only 38% of people age 18 to 29 and only 22% of African-Americans said that kneeling in protest is never appropriate. Younger age, more melanin, and more liberal political beliefs all increase the chances that someone looks on kneeling protests favorably or at least is neutral toward them.

And bonus: young women are also against people being shot.

My dears, we have a winner.

So Nike brings in Colin Kaepernick, an influencer famous enough to support the Nike brand authentically, who stars in a feel-good ad that encourages young athletes (who, remember, want to improve the world) that they should go after crazy dreams, even if it means giving up everything. Kaepernick’s street clothes remind the viewer that Kaepernick has effectively been blacklisted with the NFL because he figuratively stood up for what he believes in and helped others. 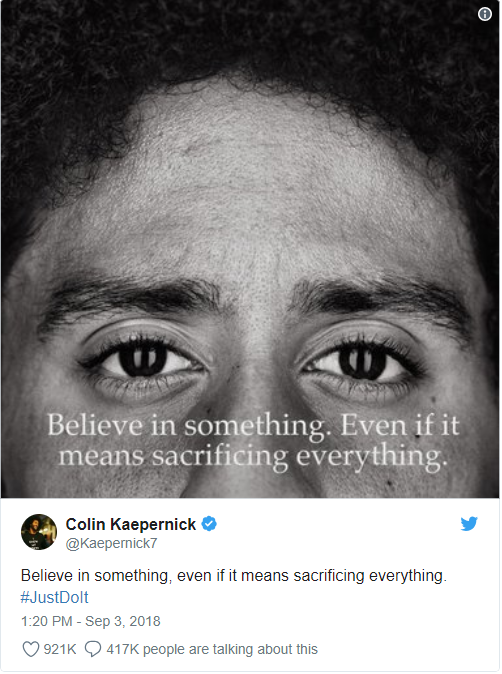 Except, we know he has a Nike advertising contract and is super rich and deeply respected by much of the country, so giving up everything doesn’t sound so bad.

The ad shows athletes from many backgrounds and with differing abilities do incredible things. The ad is overwhelmingly positive, and the viewer absorbs the implicit message that however misunderstood or marginalized they feel or are, Nike will help them make their dreams reality. Nike gets them.

Right on schedule, people see this fluffy ad about dreaming big, and then some white people burn their shoes and swear off Nike.

The ad and related images are shared all over social media. People make parodies of it. People praise it. People show their shoes (which they’ve already paid Nike for) burning. Other people retaliate by going out and getting more Nike products. 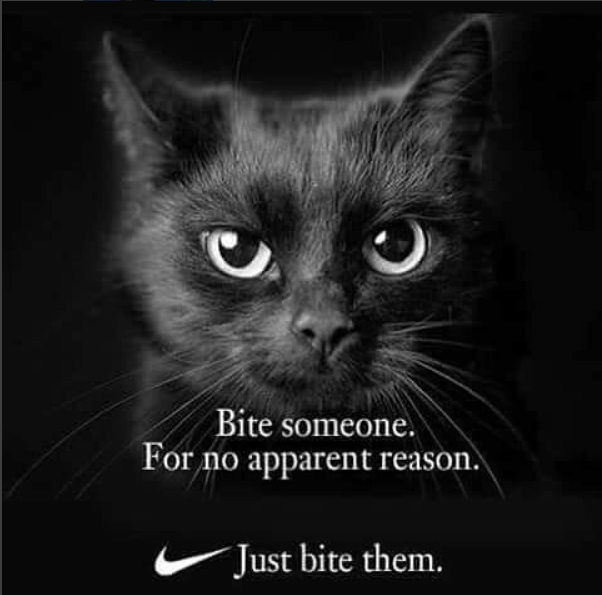 So now, Nike looks brave, ethical, and even inspiring. Or, at least, Colin Kaepernick does, and Nike brought him on even though just his face (or his power) was provocative enough that some people burn their own shoes.

Even among people who realize that Nike wouldn’t run that ad if it cost them — e.g., basically all black people — the ad seems pretty good. Because a multibillion-dollar corporation endorsing a progressive position in the fight for racial equality is helpful, avarice notwithstanding. Sure, actually doing something concrete — like paying the people who make Nike products a living wage or funding something that stops police brutality — would be more helpful. But we’ll take what we can get.

But 19% of those surveyed said they’d buy more Nike products, and 29% of men age 18 to 29 (the target market) said they’d buy more. Among that target audience, positive perception of Nike increased by 6%, helping Nike close the perception gap between themselves and competitors like Adidas. Nike saw a 31% increase in online sales and within 24 hours got $43 million worth of media exposure, much of it free and most of it beneficial.

So that’s Nike, which means we’re finally back to Gillette, which more or less just followed the Nike formula.

Gillette’s traditional target market is men who shave, but the truth is a bit more nuanced than that. Gillette’s men’s razors are used by both men and women because women’s razors are terrible, and Gillette also owns Venus, a line of women’s razors. What’s more, women still do most of the shopping for US families as a whole, so women often choose razors for the men in their lives. (Source: any research about division of labor among heterosexual couples)

So Gillette wants to seem cool to men, but they also want to seem great to women. Further, to compete with companies like Dollar Shave Club, Gillette wants to strengthen their position among younger people, who are generally more liberal than their elders and may not be cool with Gillette’s generally sexist brand.

Gillette chose the prevention of violence and discrimination against women, which isn’t controversial. So they provoked outrage among a small but vocal group by including references to #MeToo and toxic masculinity.

And how dare Gillette suggest that men protect women by not attacking them or by speaking up when they see another man be creepy! Gosh, so liberal.

Sure, you have your people who don’t care about the ad or the company’s official stance on the #MeToo movement.

But many women like the ad because we don’t like being attacked or harassed. Conservative women may or may not relate to terms like “toxic masculinity,” but they know an ad that encourages men to be good people and fathers when they see one.

Many men are fine with the ad because they don’t attack or harass women. Also, they don’t equate “toxic masculinity” with “masculinity” and thus don’t have a problem with the term. And since most men want to be good people and don’t want women to dislike or fear them, the ad might even inspire them.

The ad is more popular among Democrats, but seeing as younger people tend to be more liberal, Gillette doesn’t mind.

Many feminists, regardless of gender, like the ad because it goes beyond a normal pseudo-empowering ad and addresses the systemic and cultural issues that fuel violence against women.

That said, we’d prefer that Gillette stop being a hypocrite and do something like make a women’s razor from which the blade doesn’t disconnect and cut us mid-shave or, even crazier, make recyclable blades that don’t contribute to environmental destruction that hurts women around the world.

But we don’t expect actual corporate responsibility, so we’ll take what we can get.

Right on cue, people proclaim their outrage and show their Gillette razors (which they’ve already paid for) drowning in toilet water. Which only makes people who support healthy masculinity more likely to buy Gillette products.

Oh, sexist people of the internet. They think they’re using the power of boycott against a corporation, but their outrage is key to the plan.

They are the ones who keep people talking about what otherwise would be the most basic, banal corporate responsibility statement in the world. Gillette doesn’t think men should hurt women! Conservatives who see men as protectors of women will be so outraged!

And in the meantime, Gillette stays out of the fray and sticks with their positive messaging.

In Gillette’s defense, they are actually giving money to organizations like the Boys and Girls Clubs in order to combat toxic masculinity, and that’s awesome. I am thrilled that the trend of corporate responsibility marketing is requiring companies to do more good in order to top each other. That’s some nice capitalism.

Though if Gillette could make women’s razors that don’t go out of production by the time a woman has finished her first cartridge set, that’d be cool too. But again, I don’t expect genuine support of equality or respect from Gillette.

They’re just cashing in on the outrage.

I'm a writer, editor, teacher, and reader. I like books and human decency. Also fruit, ice cream, granola, and tea, but not necessarily at the same time. View all posts by McKenna Ainsley Johnson